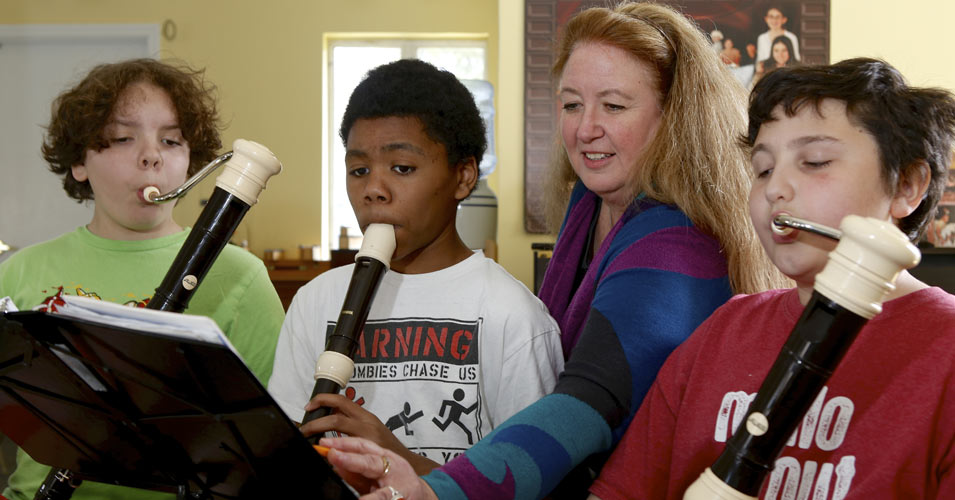 Great teachers come in many varieties. But a quality they all share is the ability to recognize and bring out the best in their students, even students whose strengths are hidden.

In this column, in honor of Teacher Appreciation Day, I wanted to talk about a teacher who has meant a lot to my son and other students at the Montessori School of Syracuse.

Patricia Getz is the elementary music teacher and director of support services at the school. She is one of three women who started the Montessori Learning Center in 1995, which became the Montessori School of Syracuse in 2002.

Her talent is the ability to find the individual musical gift a child has, and the patience and kindness to bring it forth and allow it to grow.

“So often, children fall into categories at too young an age: musical, artistic, athletic, brainy. Mrs. Getz draws all students into music, even the tone deaf or the dancers with two left feet,” says Madge Brower, mother of Nate, who was a student of Getz’s.

The spring concert at the Montessori School of Syracuse features graduating students, who are at the sixth level. Each student performs a solo. One year, midway through the event, Patricia Getz took the microphone to introduce the next performer, someone who loved to sing but was challenged with matching pitch. She described how they had worked together on rhythm, breath control and sound production prior to this moment, and then Nate Brower took the microphone and performed “The Lion Sleeps Tonight.”

“The encouragement I received made me feel comfortable enough to keep auditioning for other parts in shows and performances, in school and out.”

“I think another music teacher wouldn’t have given me chances to sing and perform,” Nate said. At Montessori, “I was always encouraged to play my recorder and sing. I genuinely thought I was talented!”

Performance itself is only a small part of the process. Pat Getz teaches the children empathy, teamwork, responsibility and bravery.

Kara Dunn remembers being very excited the day she was handed her recorder. Playing the recorder is an integral part of her school music program. Starting in first grade, students are given the instrument and participate in group lessons.

The first song is “Hot Cross Buns.” After the students master it, they are introduced to more intricate songs. Kara’s brain quickly picked up the music and notes of the new songs, but her fingers had trouble keeping pace. She began feeling self-conscious playing with her classmates.

So Kara and her parents went to Getz for help. The music teacher scheduled private and small-group lessons after school for Kara and a few of her friends.

Over time, Kara gained confidence in her playing and earned a solo in the group concert. What’s more, Kara’s struggles showed her how some first-graders might feel when they were first introduced to the recorder. And her ability, empathy and patience made her a perfect choice to be a peer mentor. This gave her more joy than playing the recorder for herself.

My own son, Jason, was not a natural performer at first. My husband, Brian, and I were often told in parent-teacher conferences a variation on: “Jason chooses not to sing during circle time. It appears singing isn’t his thing.”

But one day in the fall of his fourth-grade year, he came home from school and announced he was auditioning for a singing and speaking part in the upcoming school play.

We had never heard our son sing. Sure, he goofed around and made silly noises, but neither of us had ever heard him actually attempt to carry a tune.

We emailed the music teacher to find out if this was truly happening. She replied, “I think he would do a very nice job with this part.”

The curriculum in his upper elementary classroom includes a theater workshop component in which all students participate. They take part in every aspect of putting on a stage production, including auditioning, costume design, set production, acting, choreography and singing.

“My teacher made everything look like so much fun that I just decided to give it a try,” Jason recalled. “Once I did, the encouragement I received made me feel comfortable enough to keep auditioning for other parts in shows and performances, in school and out.”

Pat Getz understands that learning to overcome their fears and improve their performance skills will stand her students in good stead well beyond their years at her school.

Her joy in her students’ achievement is evident when you watch her watching them. And her support doesn’t end when her students move on from Montessori. She attends concerts, plays and performances of former students, always getting a picture after the show and giving them a big hug. They are happy she gets to see the next step of what she started.