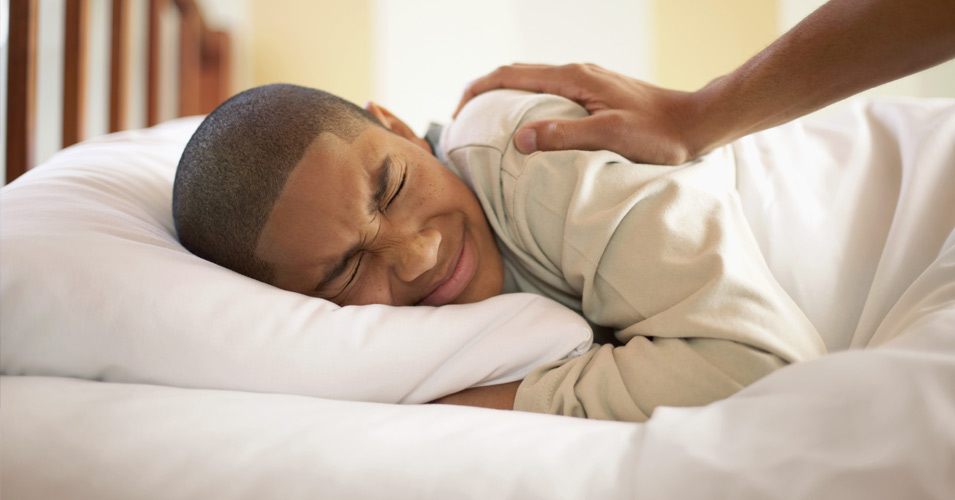 It was 11:40 a.m. on a Monday. A school break was under way, and 12 hours earlier, the house was bustling with activity—mostly from my 15-year-old son and his friends.

They played a rousing game of indoor basketball with my younger son, terrifying the dog. They watched television. They FaceTimed with another pal and posted some nonsense on Instagram. They raided the refrigerator and the pantry while my husband and I slept.

But as morning wore on, there was only silence. The trio of high school freshmen was out cold; two collapsed on the basement floor, another on the couch.

As happy as I am to be the parent of children who are long past little-kid sleeping issues (such as, well, not sleeping), I find myself facing a new sleep-related parenting issue: teen sleep habits. Anyone with a teenager in her home knows the frustrations, and scientists have found this issue to be an increasingly important topic of study.

By 12:20 p.m. the boys had ventured upstairs and inhaled the food I made hours ago. All three were still wearing their clothes from the day before. One of the boys’ dads suddenly appeared and the two friends left with grunts of thanks. With full bellies and a few splashes of water to the face, they were ready to begin what was left of the day.

I could only chuckle. My son’s avoidance of the morning hours has become pretty common in the last couple of years. There was that day last summer when the whole family waited—for two hours—for him to wake up so that we could do some swimming at a nearby lake. We finally left without him.

Then there was the Florida trip when I paced around the hotel room waiting for him to get up so that we wouldn’t waste a whole day at the amusement park he wanted to go to. And then there are all those Saturday mornings I have to bang on his door so he’s not late for the soccer games he refs in the fall and spring. I could go on.

No vacuum nor noise from his younger brother’s visiting friends nor barking dog can disturb my son before noon on most weekends. (Although, interestingly, requests from girls to meet at the mall or go ice skating do.) On his part, there’s absolutely no regret about all those daylight weekend hours spent sleeping. Other parents of teenagers I know have similar tales.

“Be sure to mention the melatonin stuff,” my son responded when I told him I would be writing on this topic. By that, he means the studies that support his claims that he is biologically programmed to stay up late and sleep in. He and his friends would be so much happier, he says, if the school day started at say, 11 a.m. “A lot of my friends are still in bed at 1 in the afternoon,” he often says.

Scientists have learned that the pineal gland, located at the base of the brain, is temporarily suppressed in the early evening by the surging hormones of the growing teenager. The pineal gland begins releasing melatonin as day fades to night, but the chemical takes longer to trigger the sleep cycle in teens than it does in adults—or younger children.

Circadian rhythms are often disrupted by these changes in melatonin levels that puberty causes. Teens often don’t naturally feel the need to sleep until about 11 p.m.—which explains why my son’s bedroom light is still on long after I’ve suggested that he call it a night.

The American Academy of Pediatrics released a statement last August urging school districts to delay start times for middle and high school students until 8:30 a.m. or later. The goal was to make a small change that could help counter chronic sleep loss in teens. The statement reminded school administrators that the recommended amount of sleep for this age group is eight and a half to nine and a half hours a night.

There’s a growing movement of parents, educators and scientists working to bring more attention to this issue. Start School Later, Inc., a coalition of these interests, launched in 2011. The organization reports on its website, startschoollater.net, that 250 school districts in 43 states have pushed their start times back for older students. The organization is collecting data from these schools to see how the changes affect academic performance and social interactions. Several districts in New York state have also changed their start times in recent years, including those in Elmira, Ithaca and Glens Falls.

Many high schools in Central New York begin classes somewhere between 6:50 and 7:50 a.m. So, until change comes to our district, I’ll probably do little more than roll my eyes. With an 11-year-old on deck, it’s going to be part of my life for quite a while.

And, really, I can’t complain very much. Somehow, my son never oversleeps on a school day. He juggles several activities and commitments, while maintaining a high-honors GPA. An athlete, he’s rarely in the house before 6 p.m. on a weeknight.

So as tempting as it may be to storm down the hall and beat on the door next Saturday morning, I’ll probably just let the boy sleep. In a few years, that same room will be empty. Mr. Sleepy Head, and all his friends, will probably be busy not sleeping—like the rest of us.