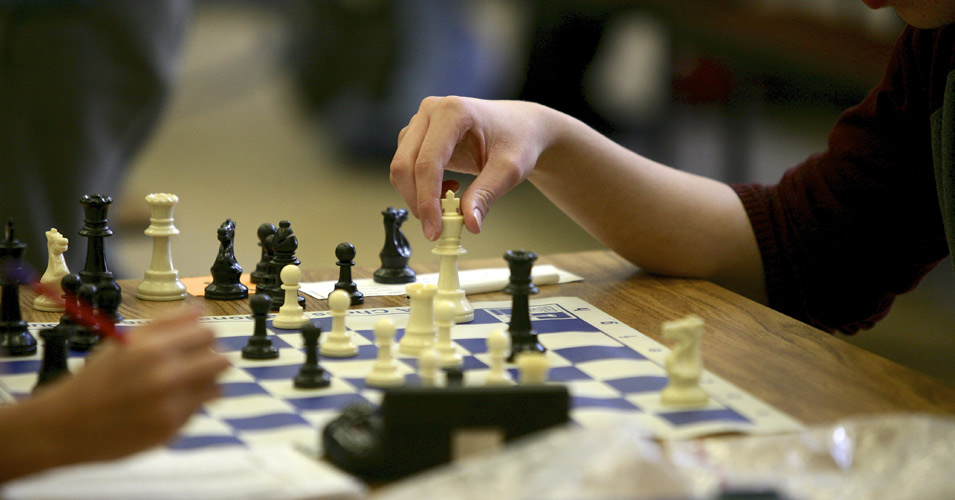 While many parents find themselves pleading with their children to step away from video games and other electronic distractions, Syracuse resident Anton Ninno and other local teachers, parents and business owners are fostering a love for chess—the low-tech board game of strategy that has origins dating back to the sixth century.

Ninno, 63, is a teacher at Southside Academy Charter School in Syracuse, where he advises a thriving chess club. Through Syracuse Chess, Inc., he and other chess enthusiasts are helping more schools form clubs, and are organizing local tournaments.

Why is chess having a moment? Ninno isn’t exactly sure. But he knows how students have responded. About a decade ago, he approached the administrators at another school, Porter Elementary, about starting a chess club. They were supportive, but wondered if there was a demand for a chess club at an inner-city school.

Within three weeks, Ninno had more kids showing up at his after-school meetings than he could supervise. He started the club at Southside seven years ago, and the club has since added 52 chess trophies in the Southside Academy display case.

Ninno says he believes it’s the one-on-one interaction with another person that kids enjoy most. “Every time you make a move, you see a direct consequence of that move,” Ninno says. “The reactions and feedback are things you just don’t get from video games—even if you’re playing online with someone.”

“I think interest in board games in general is coming back,” he continues. “But there are also plenty of ways to play chess online now. The Internet has actually helped chess because there are a lot of good apps and resources that allow people to work on specific aspects of their game.”

Chess tends to attract less boisterous students. Bobby Kunnath is a math teacher who advises the chess club at the Institute of Technology at Syracuse Central, in downtown Syracuse. His club has been active for three years and has about 15 members.

“In general, chess appeals to the quieter kids who may not be as interested in playing on the basketball team, but they still want to be social,” Kunnath says. “You get them together and they do all the same things that any other team does. But when it’s time to play, they like the quiet.”

The local scholastic tournaments have made a big difference for student players. Kunnath gives credit to Ninno and other Syracuse Chess, Inc., members like Bob Nassiff—a U.S. Chess Federation nationally rated chess master and adviser for the chess club at Manlius Pebble Hill School in DeWitt—for their work in organizing the competitions.

“These tournaments give other kids a chance to be in the limelight,” says Kunnath. “They are being recognized for what they are good at.”

While his students enjoy any competition they can get, Kunnath would like to see more of the city’s high schools competing. “For some reason, we have trouble keeping them interested once they’re in high school,” he says. “A lot of the suburban high schools—Fayetteville-Manlius, Jamesville-DeWitt, Marcellus—and the parochial high schools—Christian Brothers Academy, Bishop Ludden, Bishop Grimes—all have teams.

“I believe that Nottingham used to, but now we are the only city high school that shows up. We are trying to get more high schools in the city to start clubs. Eventually, I would love to see an inner-city tournament,” he says.

The tournaments are so student-centered that participants don’t even have to be part of an official school team. Jon Speed, owner of The Book Scout in Syracuse, who is also active with Syracuse Chess, started bringing his two homeschooled sons—Charlie, 11, and Jonathan, 9—to the tournaments about a year ago. They have enjoyed the competition and the social connections with like-minded children.

“They became interested in chess after seeing the movie Searching for Bobby Fischer probably four years ago,” Speed says. “But they love these competitions. The tournaments are probably the highlights of their month.”

Charlie Speed says he just enjoys the game, history and all. “It’s fun and good,” he says. “I like that people played it a way long time ago.”

Charlie also has some basic advice for those new to the game. “I would tell kids who want to learn chess, ‘Don’t forget to use your pawns.’ And, ‘Use the whole board.’”

Jonathan Speed adds that he would tell kids that learning to play chess is not as hard as it seems. Like his dad, Jonathan enjoys sharing his love of the game. “I like teaching other kids to play,” he says.

A chess club was started at Jamesville-DeWitt High School last spring and drew more than 30 students. William Leiker, a sophomore who had played chess for nearly a decade, says the group plans to start competing this year.

“I mostly just play for the enjoyment of it,” he says. “But I think I’ll do OK in the tournaments.”

Leiker’s father taught him the game, and many of his close friends are casual players. “I like that chess is one-on-one,” Leiker says. “You don’t have to rely on your teammates to influence the outcome. It’s all on you.”

Southside Academy’s Ninno notes that while the popularity of chess waxes and wanes with the times, its reputation for being a game for big thinkers persists. What parent wouldn’t encourage their children to take up a pastime that Benjamin Franklin once described as imparting “valuable qualities of the mind”?

“The game is an iconic part of our culture,” Ninno says. “Chess gets a certain status because it’s associated with people who are perhaps more interested in math and the sciences. But anyone can learn the game. Chess has no age, racial or economic boundaries.”

Also, compared to other pursuits, chess is a bargain. Ninno buys tournament-regulation sets in bulk and sells them to players at cost—about $15 for a no-frills chess set.

Anyone may be able to learn the game, but Kunnath, who has an adult son, admits he has had a hard time convincing girls to join the chess club at ITC. “I’ve been trying really hard to get girls to come join,” he says. “Last year, we only had one girl on the team. I don’t exactly know why girls are not as drawn to it. There is no specific reason why chess is considered more of a guys’ game.”

“At our tournaments, I would say about 20 percent of the participants are girls,” Ninno says. “I really can’t explain it. It could be that girls are not encouraged to take up chess at a very young age the way boys are. Girls connect with it on their own. Way back in its history, there was some gender discrimination associated with chess. So much has changed. There are a lot of great female players coming up in professional chess, and I wouldn’t be surprised if someday, the world champion is a woman.”

And it’s more than just a game. Chess also offers something more, according to its fans. Over the last 20 years, research studies have not been able to prove that chess makes you smarter. But Ninno says for the students he has worked with, there have been undeniable benefits. Chess requires patience, and a certain level of respect for the other player. The sportsmanship and social skills required to play chess are useful in all aspects of life.

“It helps build the ability to manage emotional stress,” Ninno says. “When kids lose, sure they can be upset. But we teach them that you always treat your opponent with respect. Losing is part of life. The trick is to learn from that and play better next time.”

Ninno, who has two grown children and four grandchildren, says he has watched plenty of fidgety kids grow into successful chess players. Some of his Southside co-workers are amazed by how students apply the lessons they learn in chess club to their studies.

“A kid who plays four chess games in a row at a tournament soon discovers that doing their math homework isn’t so bad after all,” Ninno says with a laugh.

Speed agrees. He says his children have benefited from the self-discipline that chess requires. And those skills can be applied to just about anything. “In chess, to be good, you have to think ahead and develop a strategy. That in itself requires a certain level of patience.”

Speed says that his older son, Charlie, has improved his math abilities because of the logic skills he had developed as a chess player.

Similarly, Monique Bloomfield of Syracuse, says chess has been a great activity for all three of her children: Andrew, 13, Gabrielle, 9, and Nylah, 7. After seeing the game in a Harry Potter movie, their interest was piqued. Gabrielle joined the chess club at Southside Academy, and a grandmother shared that she had played the game years ago. Bloomfield says Andrew, who has Asperger syndrome, has become the most active with it.

“He likes activities that require him to sit and think, so it was a good fit for him,” Bloomfield says. “He does have some of the attention deficit issues associated with Asperger’s, so this has really helped him to focus. And he just loves the challenge of it.”

The family will soon be relocating out of state, and chess has even become a factor in those plans. “Andrew wanted to make sure that his new school has a chess club,” Bloomfield says with a laugh. “That was important to him.”

For Syracuse Chess, the next step is to use chess as a means of building intergenerational relationships within the community. Ninno has been reaching out to local senior centers and community centers to gauge interest in family or community chess nights. Speed, who has two adult daughters who also enjoy chess, has recently started hosting community chess nights at his bookstore and has been thrilled by the response. Another Syracuse Chess board member, Dave Sorenson, holds similar events at his business: Pop’s Media Café, located in Shoppingtown in DeWitt.

“It’s real informal, about 15 to 20 people show up from the neighborhood,” Speed says. “It’s amazing to see these young kids come in, and the adults get them playing. Chess has always been non-age discriminatory. I think because it is a game of mental ability—not physical strength—the playing field is more even.”

Speed, who learned to play when he was 11, says this may be a key reason why chess has maintained such a sizable following. And it will probably be what keeps it a favorite pastime for centuries to come.

“Older players want to pass it on,” he says. “They want to pay it forward.”